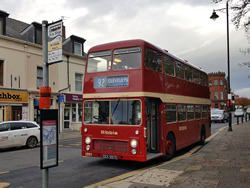 Ribble Motor Services in its heyday covered most of North West England from Carlisle in the north to Wigan in the south. Most urban operations were in the hands of local councils, but Ribble dominated rural and small town operations. It was formed in 1919 in Preston, which remained its headquarters. It had spells in the ownership of the LMS Railway, passing onto British Electric Traction, and then the nationalised National Bus Company in 1969, before being privatised by sale to its Management in 1988 who sold it onto Stagecoach in 1989 – by which time its operating area had contracted to Lancashire.

On the Fylde it had a base in Fleetwood, operating the town services there and in Cleveleys and Thornton. It also had two depots in Blackpool operating rural and interurban services and coach work. It was a joint operator in the legendary X60 service to Manchester which brought hoards of holiday makers to the town in the pre Motorway era.

Its fleet was mainly Leyland dominated and in the Fylde was mainly double deck until the advent of OMO operation saw Leyland National and Bristol RE single deckers become more common with minibuses arriving in Fleetwood in 1986. Deregulation saw operations contract as Blackpool and Fylde picked up much of Ribble’s subsidised rural and schools operations and the Blackpool depots closed in 1987/8. Fleetwood depot was relocated and downgraded to an outstation in 1991 but remains in the hands of Stagecoach until 2016, when the sole commercially viable local service was taken over by Catch22Bus.

No. 2687 was already in preservation when purchased by the Lancastrian Transport Trust back in September 1983 but no work had been undertaken on the vehicle and really the bus was simply 'saved' rather than preserved.

Built in 1949, No. 2687 is the last survivor of a batch of 31 Leyland Titans built with Brush lowbridge bodywork. It was a regular visitor to Blackpool as it was mainly allocated to Preston depot. They had relatively short lives with Ribble, mainly due to their timber framed bodies, and 2687 was withdrawn from service in 1960 and passed to independent operator South Notts in the Midlands.

Here it was repainted in their dark blue, cream and maroon livery and upon final retirement was purchased for preservation by a Bolton enthusiast.

It was in 1983 that the vehicle passed to the Lancastrian Transport Group and the vehicle was moved undercover to the St. Helens Transport Museum. Some work has been undertaken on overhauling the chassis and one of the next stages is to lift the delicate body off the chassis for shotblasting. The body framing will need a complete renewal and it is hoped to progress this when funding permits. No. 2687 was moved to Blackpool in October 2004.

During Spring 2018, 2687 was moved to the Isle of Man where a specialist joinery contractor is now working on the timber frame rebuild as a long term project. 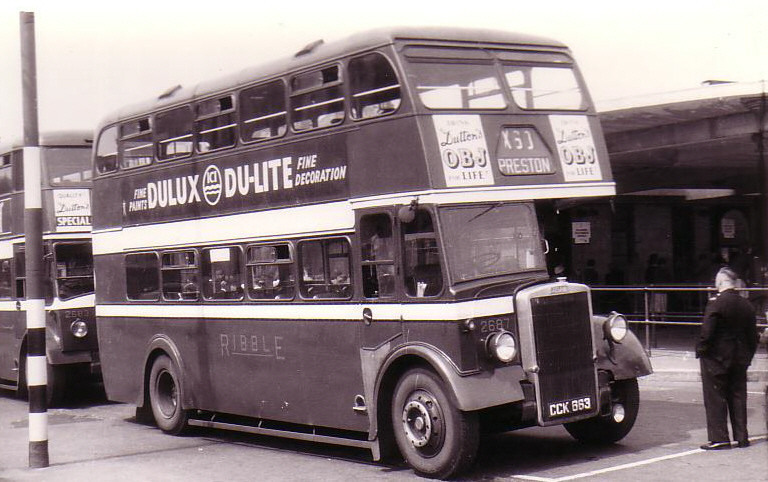 After concentrating on single deck purchases during the early 1950s, double deckers came back into favour with Ribble from 1955 and the company ordered 120 Leyland Titan PD2s with both Metro Cammel and Burlingham bodywork. Burlingham was of course a product of Blackpool origins that later became Duple, more commonly associated with coaches than buses in later years. 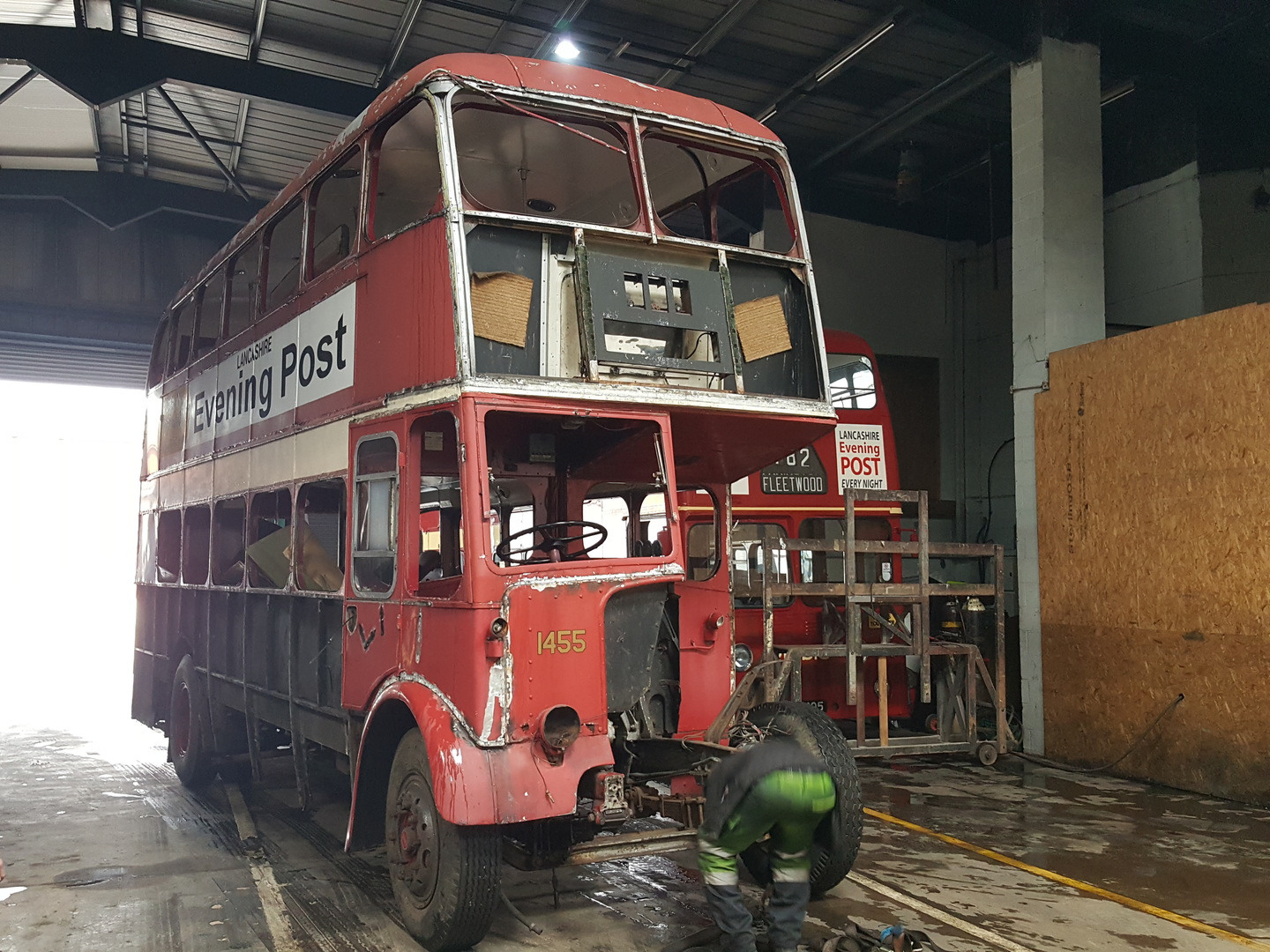 After six years further service it passed to a farmer called Ferguson in Friockheim, Angus where it was used to transport raspberry pickers. This area had a plethora of fruit farms, many of which owned old buses to transport workers to and around the premises. 1455 survived on the farm until February 1996 when it passed into private preservation in St. Andrews.

By 1999, No. 1455 had found its way into the Ribble Vehicle Preservation Trust's collection along with sister bus No. 1467. The latter was found to be a better prospect for long term preservation by the RVPT and 1455 was unfortunately heavily stripped for spare parts.

Thankfully, No. 1455 was offered to the FTT for further preservation and it joined the collection in August 2019. No. 1455 currently awaits remedial attention before becoming an active member in the fleet. But, as a Blackpool built and Blackpool based bus it is now, truly, home.

This was the very first bus acquired by the original Lancastrian Transport Group for preservation back in January 1983.

Ribble operated many early Leyland Atlanteans including some 'lowbridge' examples which featured curious seating layouts on both decks because of the constraints imposed to achieve the low height around a traditional rear axle.

No. 1805 is an example of this type and was new in June 1962 as part of a batch of 14 buses (1801-1814). Originally based at Blackburn, the bus was later transferred to Penrith in the north of Ribble's territory and converted for one man operation.

The bus ended its operational life at Morecambe and Lancaster, by this time wearing the typical National Bus Company poppy red livery. Withdrawn in 1982 it was purchased for preservation and during 1984 was returned to its original cherry red and cream livery. 1805 was withdrawn from the LTT's operational fleet during 2002 in need of framework repairs to the lower panel sections.The 90th anniversary of Ribble in 2009 prompted us to return 1805 to operational condition and work started in January on framework repairs allowing the bus to return to use.

In February 2017, 1805 was treated to a further repaint in Ribble cherry red, with late 1960s style lower case fleetnames. 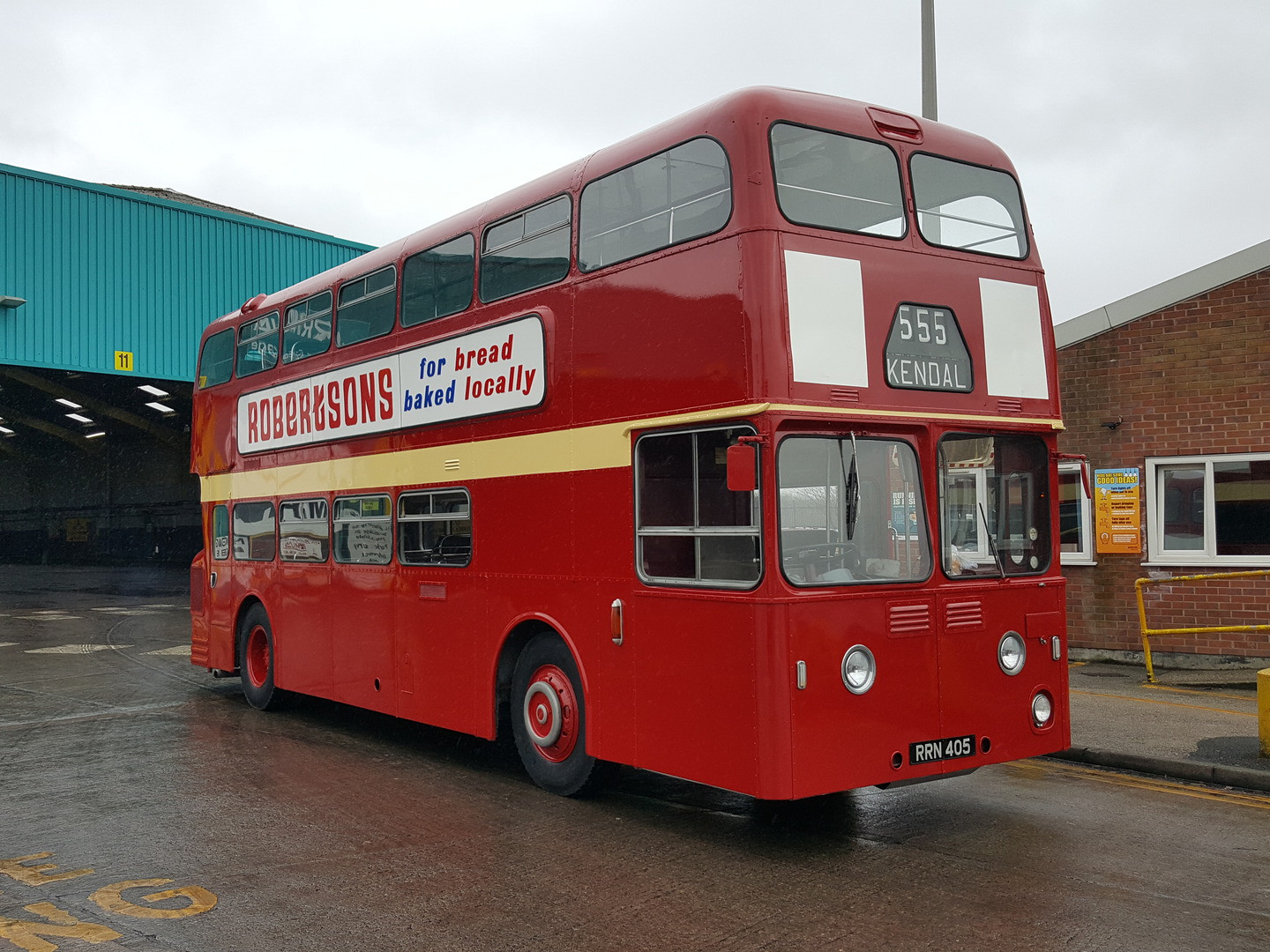 For fifteen years one of Ribble’s ‘K’ registered flat windscreen Bristol VRTs enjoyed the wonderful scenery of Devon but was finally withdrawn by First Western National during 2001 after almost 29 years of passenger service.

After operation in Carlisle, 1997 returned south and operated from Preston, Kendal, Ulverston and Blackburn garages before being finally withdrawn in January 1985. Crosville had already purchased other members of the batch and No. 1997 joined its sisters and was quickly repainted in NBC leaf green livery.

It had a relatively short career with Crosville and in 1987 it was sold to former NBC subsidiary North Devon Red Bus and operated for a time in Crosville green livery but with ‘Red Bus’ fleetnames!

Later repainted in red and cream livery, Red Bus were absorbed into the FirstGroup in June 1999. By this time numbered 1056, the bus was based at Ilfracombe garage. Finally withdrawn in January 2002, the bus was offered to the LTT after clocking up almost 29 years in passenger service. It returned north in August 2002 and stored awaiting its turn for restoration.

Full restoration of 1997 commenced in September 2006, including a complete repanel undertaken by the BusWorks in Blackpool. Although repainted back into Ribble cherry red early in 2010, it was not until 2015 that no.1997 finally returned to operational use following final mechanical overhaul work. 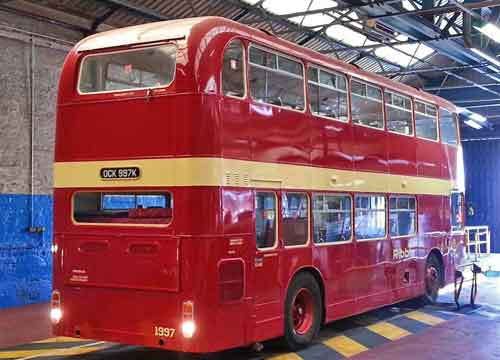 The introduction of driver only 36ft long single deck buses in the 1960s to replace conductor operated double deckers spawned a range of new and sometimes short-lived chassis. Blackpool standardised on the AEC Swift while Fylde chopped and changed. Ribble was a ardent Leyland supporter but turned to Bristol for its single deck bus orders from 1968 to 1971. The Bristol RE was one of the most resilient of the designs and outlasted most of its peers. It encouraged lorry (and occasional bus) builder Seddon to build a similarly inspired RU chassis that was somewhat less successful. Fylde 47 survives as an example.

Ribble’s last REs were a batch of 40 (331-370) with the common ECW body delivered between April 1971 and July 1972 with 366 (OCK366K) arriving in the latter month. It entered service at Preston depot but by its first birthday it moved to Aintree operating on Ribble’s Merseyside services. In 1985 after 12 years at Aintree it moved to Blackburn for a brief period before withdrawal at the end of the year.

366 and sister bus 365 were transferred within the National Bus Company to Hastings & District where they saw service numbered 465/466 until 1994. Retirement was active as both were acquired by the Hastings & District RE Group who held an operator’s license and used 466 and other REs on a local tourist service until its withdrawal in October 2000, though its sister was used for spares. Since then it has been stored securely in St Leonards, near Hastings and was offered to the LTT during 2007 and acquired in October.

In February 2008 it was prepared for the long journey north by Southdown PSV and returned back to Lancashire for the first time in 22 years. In November 2008, 366 was returned to 1970s style NBC poppy red livery and the bus returned to use during 2009. After active use and an engine rebuild in 2018, 366 was treated to a further repaint in NBC poppy red in October 2019. 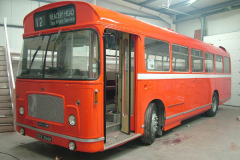 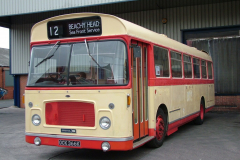 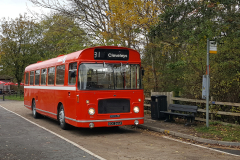 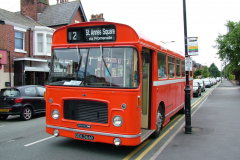 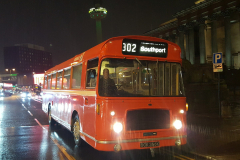 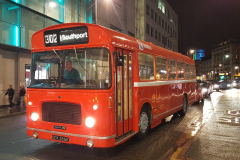 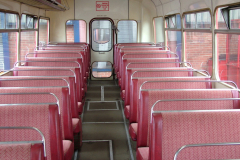 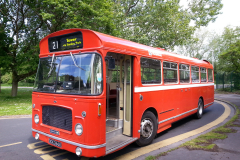