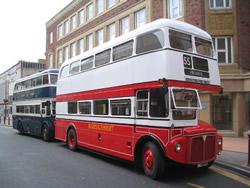 It was business as usual when Blackpool Transport replaced Blackpool Corporation in 1974 under the recently appointed manager Derek Hyde. The last of the 55 AEC Swifts was entering service and more than half of the 13 One Man Operated (OMO) Trams introduced from 1972-1976 had similarly rescued the economics of year round operation of the sole surviving Promenade tram route. With operation of OMO single deckers now at their practical extent, consideration turned to buying double deck buses that could be similarly operated to convert further services. As a result no less than 64 Leyland Atlanteans replaced most of the remaining Leyland Titans between 1977 and 1984. These impressive vehicles seated up to 86 – compared to just 52 seats in the early post war double deckers.

Unlike most operators, Blackpool retained conductors on some of its busy routes – indeed the last bus route (the 14) kept them until 2000. As a result its last Leyland Titans soldiered on until 1988 by which time they were over 20 years old. They had been joined by 13 new to London Transport Routemasters between 1986 and 1989 and these survived, in mainly summer only use, until 1996.

Local bus services were deregulated and opened to competition in 1986 and Blackpool and Fylde battled for territory – and both made gains from Ribble. As part of their armoury Blackpool purchased 35 Optare City Pacer minibuses seating 19 seats – one fewer seat than the first buses of 1921. It purchased Fylde in 1994 and absorbed it completely in 1996 taking the fleet total to 208 buses. It has since rationalised operations, closing the former Fylde depot in 1999 and reducing the fleet size to 153.

From 2001 to 2010 buses ran under the Metro Coastlines banner with individual liveries for each route and the green and cream livery favoured since 1933 was dropped. Since 2010 the Blackpool Transport name has returned to use and a standard livery using black and yellow (favoured for minibuses since 1987) has been adopted.

No. 334 is typical example of Blackpool’s 64 strong fleet of East Lancashire bodied Leyland Atlanteans acquired between 1977 and 1984. No. 334 itself arrived in June 1980, replacing 12 year old PD3s such as 529. It entered service the following month in an attractive livery of off-white with green roof, upper deck window surrounds, narrow band above lower deck windows and broad band on lower deck panels. It retained this style until June 1988 when it was painted into the post-deregulation scheme of cream with green roof, window surrounds and skirt. Another repaint followed in January 1991 and a further in June 1994 by which time the style had been revised to feature matt black window surrounds.

Atlantean withdrawals began in 1989 and by 1994, Nos. 301-321 had been sold, although three (Nos. 310/335/342 were sold for scrap after fire damage). Blackpool then purchased neighbouring Fylde Transport and the new subsidiary included many vehicles much older than the Blackpool Atlanteans. Replacement of these took priority and it was to be 2002 before any more of the East Lancs Atlanteans were sold. Several were used by Fylde before it was subsumed into the Blackpool operation in June 1996.

No. 334 had a brief period of storage during May and June 1995 but was repainted in the revised livery (cream, green skirt and roof level stripe, black window surrounds). It was transferred to Fylde in April 1996 but did not receive the blue livery as this was shortly to be abandoned. It continued to run from Squires Gate depot in the main until it closed in April 1999.

Whilst at both Rigby Road and Squires Gate it saw a mixture of all day services and school contracts. No. 334 was one of five Atlanteans stored in November 2002, but brought back into use in January 2003 as more buses were needed for a tramway replacement service. The delivery of nine Dennis Tridents in May 2003 brought 334’s career to an end. Its last day was 29 May 2003 when it ran on service 20 (Town Centre to Marton Mere Leisure Park). In June 2003 it was acquired by member Graham Oliver for preservation as part of the LTT collection and passed into Trust ownership in 2005.
Extensive restoration work started in May 2006 involving a complete repanelling and a full repaint was completed in August 2007. 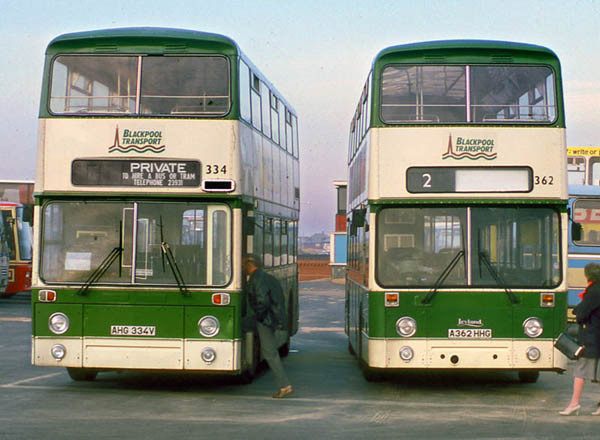 The London Routemaster bus is probably the most famous design of bus ever produced. Over 2,760 were built between 1954 and 1968 and hundreds of them still operated in all day service in the capital until 2005, even though large numbers had been withdrawn between 1982 and 1988. During this period many were snapped up by other operators, particularly after deregulation of the bus industry in 1986. The new privatised companies saw conductor operated RMs as giving them a competitive edge to win passengers.

The newly formed Blackpool Transport eventually bought 12. No. 521 was taken on trial in January 1986 before more were purchased. Initially it ran in London red, but in May it was the first to receive the 1930's red and white livery chosen for the Routemasters.

At first, 521 and other RMs were dedicated to service 12 to St.Annes to compete with Fylde Transport. However, as other Blackpool town services became one man operated the 12 followed suit and the RMs were confined to summer use  on the Promenade. After the 1994 season they retired to depot but came out in 1996 for a park and ride service to Lytham Golf Championships. 521, with 522-524, then continued to be used for the Zoo service for the rest of that year.

In 1997, Blackpool Transport sold the RMs to Reading Mainline but following that company’s take-over by Reading Transport, 521 passed to Walkabout Inns as a promotional bus. When surplus to their requirements it returned to Blackpool as part of the LTT collection. Over the winter of 2003/2004 it was re-panelled and paint stripped by LTT volunteers, being repainted in its vintage style red and white livery in June 2004. In November 2006 the bus was upgraded back to a class VI psv standard and was also used by the Trust's partner company for wedding hires and other events.

In December 2016, "521" was repainted back into 1970s style London red and white livery, allowing the bus to be more useful on wedding hires. 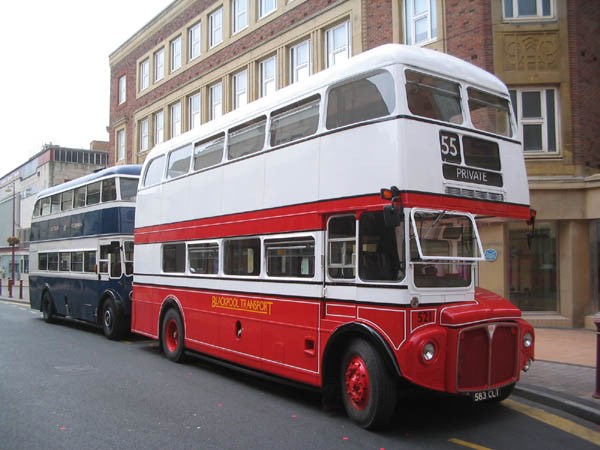 Deregulation of local bus services in 1986 not only resulted in Routemasters being used as a competitive tool by privatised bus operators, but high frequency minibus services were developed instead of high capacity buses on low frequency services that had become the norm. Hundreds of van conversions appeared throughout the UK to create 16-20 seat minibuses. By 1987, Optare produced the first purpose built and very stylish minibus on Volkswagen van chassis.

No. 575 is one of 35 Optare ‘City Pacers’ (including three ex demonstrators) acquired by Blackpool after deregulation – the majority in 1987/8. A distinctive identity was adopted using the "Handybus" name and a livery of black with yellow skirt. Several major urban routes were converted to use these minibuses, 575’s batch of ten converting service 9 (Blackpool to Cleveleys) in 1988, replacing PD3s and precipitating their final withdrawal at the end of the summer season.

Interestingly, service 9 had been a haunt for the unique Blackpool centre loaders in their latter years. Single deck AEC Swifts were used from 1970 until 1977 when double deck Atlanteans took over. A brief return to conductor operation after deregulation saw PD3s making regular appearances. This is probably the only service where each type of Blackpool vehicle in the LTT collection would have operated at one time or other.

Optare later developed a replacement minibus – the Metrorider – and Blackpool evaluated an example in 1995 as a replacement for the early City Pacers. This led to several small orders which replaced 17 City Pacers during 1995/6. The remainder survived an influx of 14 Metroriders (used for further minibus conversions) in 1998 but were finally replaced by low floor Optare Solos in January 2000.

No. 575 survived until the last week of operation of the type in Blackpool – its last duty being on 25 January 2000. It initially joined the Thames Valley Training fleet in Eastbourne before returning north in March 2003 for preservation and was restored to original Handybus livery early in 2004. It was acquired as part of the core LTT collection in June 2005. 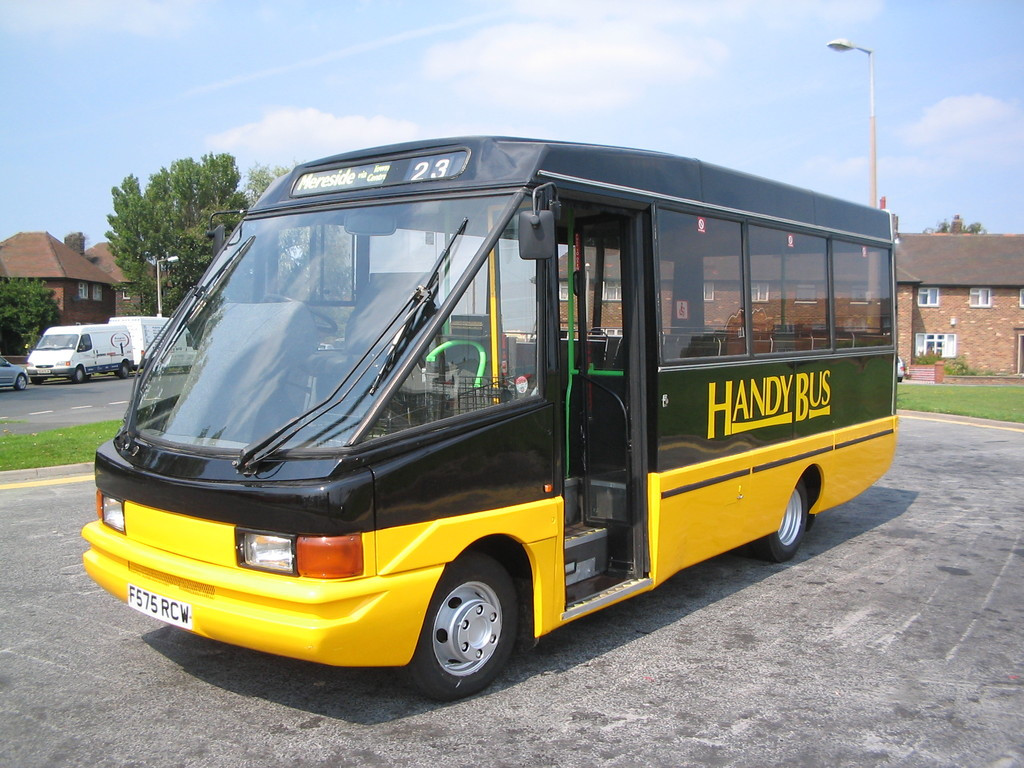