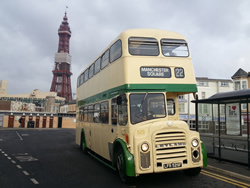 Blackpool Corporation Transport can trace its ancestry to 1885 when the electric street tramway was opened by a private company. The Corporation exercised its right to take over the company in 1892 and added the Blackpool and Fleetwood Tramroad Company in 1920. In addition to the original Promenade route, trams now ran along Lytham Road, Central Drive, Talbot Road to Layton and Whitegate Drive/Waterloo Road through Marton, plus the newly acquired line to Fleetwood.

The first bus service started in 1921 linking Cleveleys tram stop with Thornton Railway Station – well outside Blackpool. The following year saw local bus services commence in Blackpool though these were often short and inefficient. The Layton and Central Drive tram routes were converted to buses as part of a modernisation plan which saw 115 new trams and 154 new buses arrive between 1933 and 1940 all featuring the trademark centre entrance favoured by legendary manager Walter Luff.

Further tram services were replaced by buses between 1961 and 1963 and the bus fleet now topped 180 – almost all Leyland Titan double deckers. From 1969 to 1975, 55 driver only AEC Swift single deckers replaced the older Leyland Titans allowing staff efficiencies to be achieved.

Local government reorganisation saw Blackpool Corporation become Blackpool Borough Council and the transport department became ‘Blackpool Transport’ in 1974 and by this time the fleet had dropped to 143 – as it had been before the 1960s tram route conversions reflecting reduced services and frequencies as bigger buses were now used and more people owned cars.

Blackpool’s familiar centre entrance trams dating from the 1930s were once accompanied by streamlined styled buses, very different from those that operated in other towns and cities in the UK. Indeed, so futuristic was the design that an icon, cast in stone, appears on Blackpool’s Town Hall to this day, symbolising the development of wheeled transport (see below).
The first Corporation motor buses ran in Blackpool in 1922 and were initially mainly single deckers. Double deckers became standard from 1932 prior to the arrival of Walter Luff as manager the following year. Luff’s influence on the tram fleet is legendary but from 1935-1940 he introduced 130 modern streamlined buses. Post war two batches of 50 double deckers were delivered between 1949 and 1951, of which 246 was one of the first batch arriving in December 1949.

Like the pre-war buses these were full fronted centre entrance Leyland Titans with bodies built in Blackpool by Burlingham. They were, however, built to the newly introduced maximum 8ft width (instead of the previous 7’6”) and could seat 54 passengers, slightly less than a standard rear entrance bus. Luff retired in 1954 and Blackpool started to specify more standard designs culminating in the PD3s of 1967/8. These replaced the 1949-1951 centre entrance buses and 246 was withdrawn in October 1967.

These unusual vehicles did not command much demand on the second hand market, so few saw further use. 246 was an exception, though it stayed within the family becoming a mobile mess room for the tram track ‘Permanent Way’ repair gangs. It ran in this role until 1974 often to be seen by the side of the tram tracks where repairs were undertaken, painted in an all-over green livery.

In early 1976 the bus passed to the ownership of Lister of Bolton (a bus dealer) who used it as an office for many years. 1989 saw the bus join the preservation world before being acquired by the Lancastrian Transport Group the following year. No. 246 is admittedly in a very poor condition and will require substantial reframing as part of its restoration. It returned to Blackpool in September 2004 after several years in store at the St. Helens Transport Museum and awaits extensive restoration work before it can operate again. 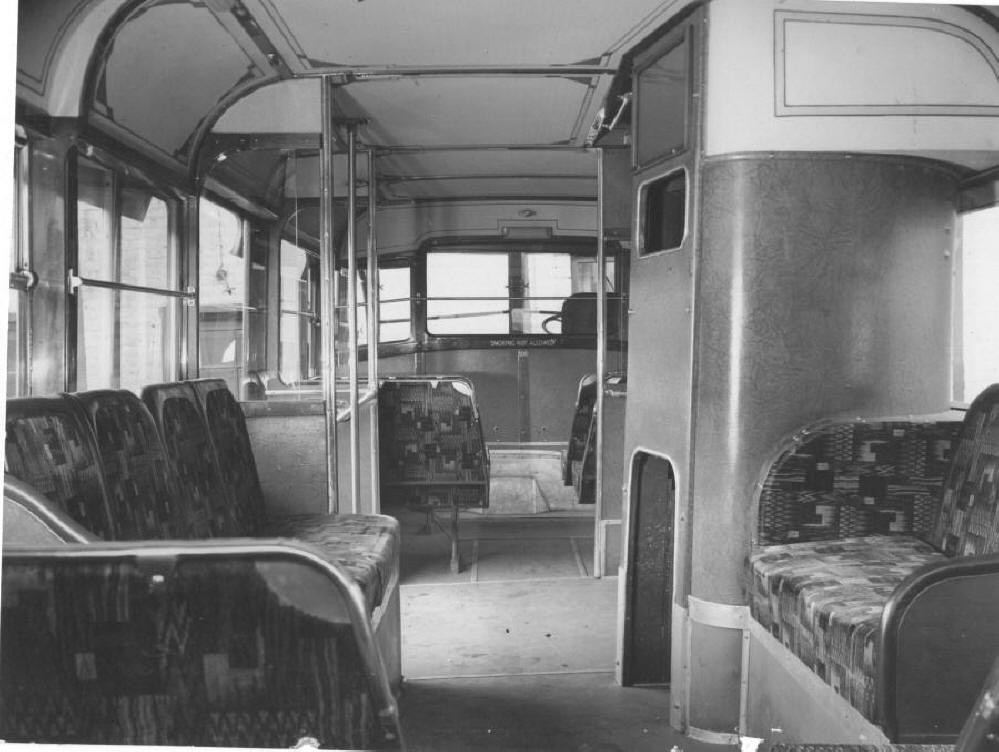 The tenure of Walter Luff as manager of Blackpool was characterised by flamboyant streamlined centre entrance vehicles, culminating in the Coronation tram and Streamline PD2s represented by 304 and 246 in our collection. Luff retired in 1954 and was replaced by Joe Franklin. While Franklin continued to innovate around the tram fleet, his approach to the buses was to adopt more standard vehicles. His first order was for 10 rear entrance PD2s in 1957, half (301-305) bodied by local firm Burlingham and half (306-310) by Metro Cammell of Birmingham. A legal dispute over previous bodies from Burlingham had soured the relationship and Metro Cammell became the supplier of choice for all new vehicles from 1957-1968. Perhaps surprisingly Franklin retained the Blackpool full front design and decorative ceilings, but otherwise the PD2s were standard until the newly introduced 30ft. long PD3 was introduced in 1962.

The first batch, 301-310 were followed by 311-330 in 1958 and 331-350 in 1959. Generally most new buses entered service on trunk routes such as the 11/11A, 14 and 22/22A and the PD2s became regulars on these routes, gradually cascaded onto quieter routes when newer PD2s, or later PD3s arrived. By 1969 the rear entrance PD2s were the oldest in the fleet and began to be replaced by new AEC Swifts, like our 570, designed to be operated by one person, yet accommodating the same number of passengers as a PD2. This bucked the trend as now the quietest routes had the newest buses.

The conversion to OPO operation was accelerated by the new Bus Grant which gave operators up to 50% off new buses. This meant that all the PD2s were withdrawn by 1975, most achieving only 13-15 years in service which was shorter than most previous buses (246 running for 18 years). Several were sold for further use and 3 were kept for ancillary duties from 1975. 334 and 337 were converted to mobile mess rooms for the tramway Permanent Way gang, replacing 246 and painted all-over orange, lasting until 1986 and 1988 respectively.

346 survived to the end of regular PD2 operation in March 1975 and then saw use, like its sisters as a mess room, but this time for the Illuminations Department. Active use ceased in spring 1982 but the bus remained stored until December 1985 when it was purchased by the North West Museum of Transport and moved to Burtonwood Airfield and later to St. Helens Transport Museum for preservation. Sister bus 334 was later secured as a spares donor.

Although tidy enough to be displayed for several years 346 was never restored and was declared surplus to requirements in 2005 as part of a review of their collection for display at their refurbished museum. 346 was acquired by LTT in September 2005 from the St.Helens Transport Museum collection and returned to Blackpool in December 2005.

Restoration work on Blackpool 346 started in the autumn of 2015. 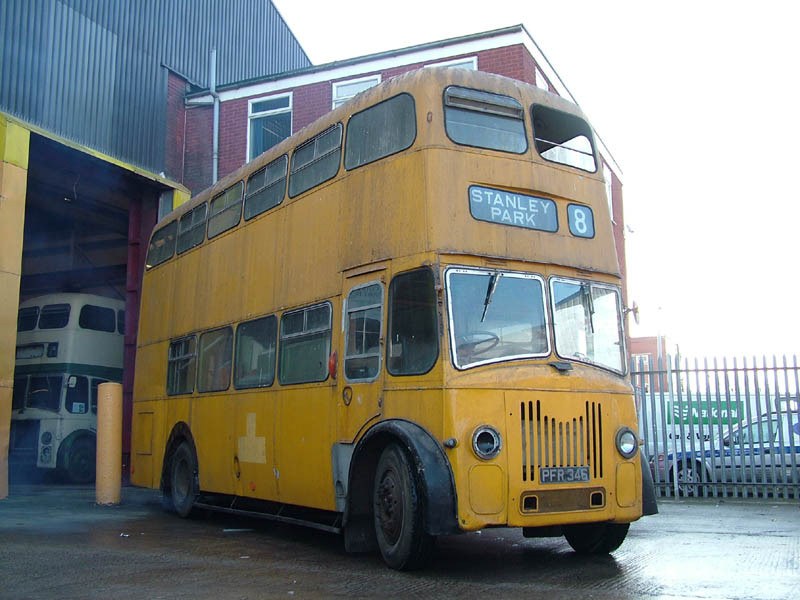 Blackpool’s half cab buses gained classic bus status towards the end of their lives, but in fact it was not until 1965 that Blackpool adopted this conventional double deck bus design. Prior to this the town’s buses were unique full fronted models such as Nos. 246 and 346 described earlier.

The half cabs came in two distinct batches between 1965 and 1968. Nos.381-400 introduced the type to Blackpool whilst 501-540 were delivered in 1967/8. Although the first to be withdrawn was in 1977, the type had relatively long lives with Blackpool Transport with the last examples operating in passenger service until November 1988.

Blackpool 529
The 1968 batch of PD3s were largely withdrawn in 1980/1 and were replaced by a batch of 86-seater Leyland Atlantean buses. 529 was taken out of service in August 1980 with the arrival of a further batch of Atlanteans, including 334 that is now part of the LTT collection.

It was stored until July 1981 when LTT member Graham Oliver acquired it for preservation - the first Blackpool PD3 so purchased. It was modified to match the original livery and rallied for a few years.

Graham sold the bus in 1984 and it was kept initially in Blackpool then later in Burscough and more recently at St.Helens Transport Museum for restoration. 529 was sold back to Graham Oliver in 2001 and in 2003 it returned to Blackpool to join the LTT collection, passing into Trust ownership during 2005. Full restoration of 529 started in May 2006. The bus has been extensively repanelled and was repainted into original livery style during September 2006. 529 finally returned to the road in October 2008 for the first time since 1983 - an absence of 25 years.

529 has operated commercially on wedding hires for our sponsor company Catch22Bus since 2013 and occasionally on Sea Front service 21. In December 2017, the bus received a further repaint, with period adverts in the 1970s all-cream livery. 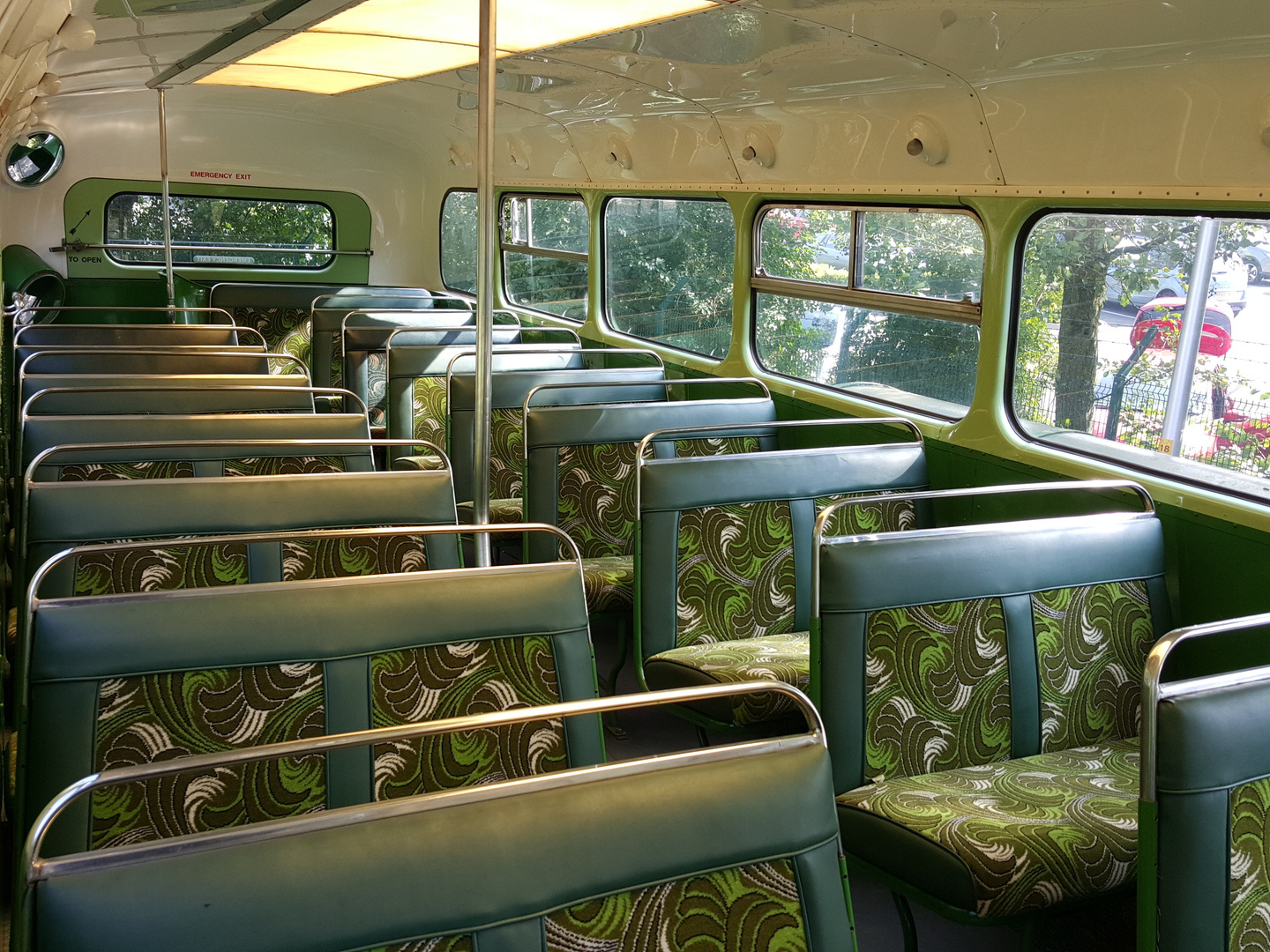 By the late 1960s traditional conductor operation of bus services was becoming too expensive, particularly on the less busy urban routes. In early 1960s 36ft (11m) long single deck buses had been legalised and could be operated by one person (OPO). From the mid 1960s many operators took advantage of the reduced operating costs such buses achieved. In 1968 the government introduced a grant scheme to pay 25% of the cost of OPO buses and Blackpool was one of the fleets to take advantage. It placed an order for 15 new single deckers and the cheapest bidder was AEC of Southall to provide 15 of its Swift chassis with bodies by Marshall of Cambridge. These were the first Blackpool buses not to be built by Leyland since the 1930s, albeit AEC and Leyland were under common ownership.

The batch (541-555) arrived in two parts, the first few entering service in December 1969. They broke the establish practise of putting new buses on the best performing routes as they replaced the first rear entrance PD2s on the quietest services. The downside of one person operation was the time taken for the driver to take fares at the stop and to try to reduce this, two doors were fitted, with a  front entrance and centre exit, so that passengers could board and alight at the same time.

The first batch of Swifts was successful and ten more arrived in 1971 and another 30 in 1974, all of which had a higher driving position and fully automatic transmission, compared to the low position and semi automatic gears on the first batch. 570 was one of the third batch entering service on 1 April. These replaced most of the remaining PD2s, with the last few (including 346) surviving into 1975 to allow for the 1968 batch of PD3s to have their mid life overhaul.

New in all-over cream, a new green and ivory livery was applied to most Swifts from 1979. A few escaped treatment as the first withdrawals began in 1980 – at the age of just 10. The first batch was all gone by 1983, the later batches were withdrawn gradually until a purchase of second hand Leyland Nationals replace the last few in February 1988. 570 survived until December 1987.

The final survivors were sold to a dealer and No. 570 passed to Blue Saloon of Guildford before being acquired by member Graham Oliver for preservation. It returned to Blackpool for repainting in the green / off white livery in 1997. No. 570 joined the LTT collection in March 2003 and a further repaint was undertaken in October 2005.

Despite this, 570 was largely stored with various mechanical problems but these were attended to during the autumn of 2017 and in January 2018 the bus passed its Class VI PCV test. It has since been used occasionally in passenger service and on wedding hires. 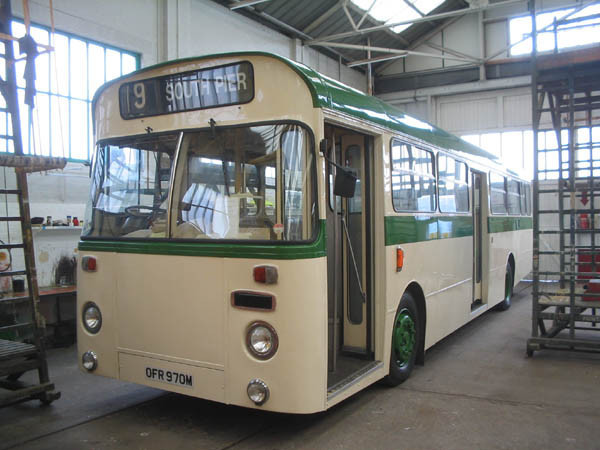 This website uses cookies to improve your experience while you navigate through the website. Out of these, the cookies that are categorized as necessary are stored on your browser as they are essential for the working of basic functionalities of the website. We also use third-party cookies that help us analyze and understand how you use this website. These cookies will be stored in your browser only with your consent. You also have the option to opt-out of these cookies. But opting out of some of these cookies may affect your browsing experience.
Necessary Always Enabled

Non-necessary cookies are not strictly necessary for the website to function though they do allow a better user experience. They are used to collect user personal data via analytics, ads, other embedded content so we can improve our service to you. We have to ask for your consent prior to running these cookies on our website.